HAVE DEMOCRATS TURNED INTO SOCIALIST/COMMUNIST?????

This is one “hell of a question” to be asking in America; but, I feel it has to be at the forefront of any discussion about the Democratic platform. It seems it is only a choice of one or the other. Socialism takes over thru programs and policies while Communism takes over with force. Force of what? I’d bet my life it is by force of the gun! Now can you “air headed LIBERAL BASTAGES” kinda see why the democrats all want to confiscate your guns. That one amendment is what has kept this country free for so long. Without the 2nd amendment, all the others will disappear. I’m going to post some things below that I would appreciate you giving some real thought.

All this Covid 19 crap was recognized by the democrats as a means to an end. They, the democrat governors, mayors and city councils, have decided to see how far they might be able to push America to the left. Did you ever think you would see any American roll over for all the “ORDERS” they have been trying to “shove down our throats”? “STAY AT HOME IN YOUR HOUSE” for your own safety. “BBBSSS”. If you get my drift. The man behind this is a “LITTLE POWER HUNGRY ASS” named Dr. Fauci. He has been elected to nothing and is trying to control thru fear. It is time to tell and show these “LIBERAL BASTAGES” that we as Americans have had our bellies full; and, we will not follow them into Socialism or Communism. Arm yourself with information. And, by all means, with plenty of weapons and a hoard of ammo so you will be able to survive and protect your family from anything the “LIBERAL BASTAGES” decide to throw your way. 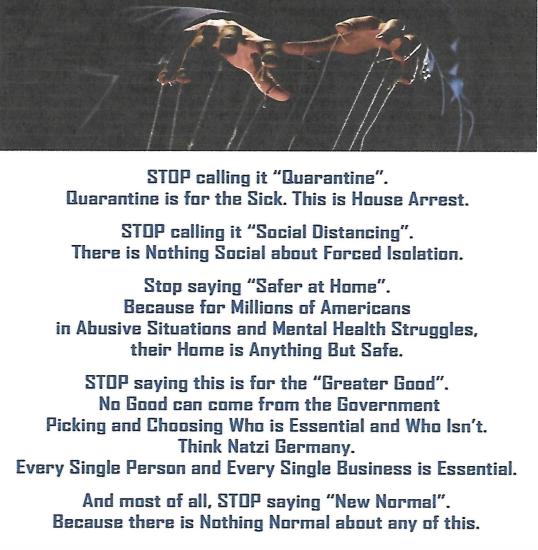 If they are telling you it is OK to go to Home Depot, but not to Church, it is not about your health. They are restricting your 1st Amendment Right of Speech, Press, Assembly and Religion. It is wrong!!!

Folks, none of this is for you health! And, it is intended to see how far you can be pushed. They are running an ongoing experiment to try to get you, or see if you, just might accept socialism or communism. The democrats along with the liberal media don’t care which one you accept as they both lead to the same ends. They will be among the elitist; and you will be among the “PEONS”; and they will rule you and your life style with an “IRON FIST”. It only makes “COMMON SENSE” for you to put a stop to this before they, the “LIBERAL BASTAGES,” get a foot hold or a “strangle hold” on your neck. Do not think these “LIBERAL BASTAGES” will not put their boot on your neck? As exampled by the “LIBERAL BASTAGE” judge, Eric Moye, who sentenced Shelley Luther to jail for simply not apologizing to him for being selfish. Her being selfish was wanting to open her shop so she and her employees could work to feed their families.

Let me repeat this once, twice and once again. If you let them get a hold of the power, and that is what this is all about, you are not using the “COMMON SENSE” given you. Remember, all your rights come from “GOD” not the government. He gave you the “COMMON SENSE” to know that so “get off your ass and use it”.