Now here is a news flash for you! “Democrats lie”. The democrats have for years been lying to the general public; but, have now decided they no longer need to continue the lie of “we do not want to confiscate the American public’s guns”. It is now out in the open; and if they are elected, they will proceed to trying this confiscation thing. It could lead to a “bloody uprising” through out the country. Most gun owners are very passionate about the 2nd amendment and will defend it so as to defend all the other amendments such as the first which protects the right to free speech and the freedom to worship as one chooses. Without the 2nd none of the other amendments can be upheld.

Sometime back, we had a gathering at our ranch and one of the liberal persons walked out on my porch and started an argument with me about how wrong I was to think that Obama and the democrats wanted to confiscate my guns. I tried for just a moment to try to express my opinion, but to no real end. Sooooooo, I did the best thing I knew how! I advised him to gather his family and go home and live his life and I would do the same with my family. But all of those who really know me would tell you I had to make my point. I told him that would be best for him as “I was a mean enough SOB to shoot him so don’t continue this foolishness”. I will always feel somewhat bad for that; but, it is the truth so I felt obliged to give the warning.

I have often wondered after all the democrat candidates have come out supporting “gun confiscation,” and I have been proved right, if he ever thinks about his position and if he might have changed his views. Everyone has “a cross to bear” and I guess mine is always being right. I thought I was wrong once but it turned out I was once again right. HAHA! I guess for democrats to understand this is a stretch for they are always wrong. In their defense, they were born with their heads screwed on backwards so I guess it is not their fault they have no “COMMON SENSE”. They were just born that way. I understand it but that does not mean I have to tolerate it.

I’m going to add a link and the article from those wonderfully stupid people at yahoo about Joy Behar and how she has told the democrats to stop talking about gun confiscation until they are elected then “just do it”. She is not the only “liberal bastage” to express this thought, but just the latest. Read the article posted below and realize that she and all democrats think it is OK to lie or “lie by omission”. BTW, isn’t that one of the “TEN”. But what would a democrat know about any of GOD’s commandments.

Joy Behar to Dems: Don’t Tell Voters ‘Ahead of Time’ Before Taking Away Guns 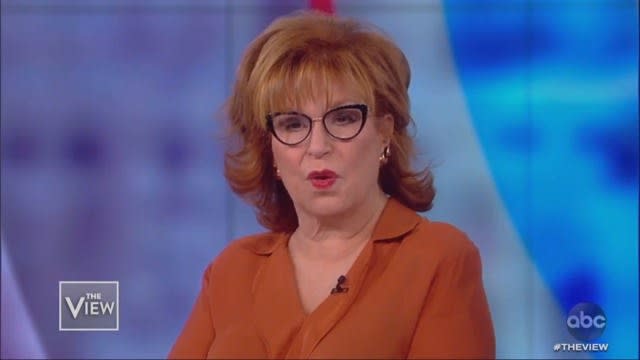 In a segment that will almost assuredly draw howls from conservative media and politicians, The View co-host Joy Behar declared Monday that Democrats need to stop giving American voters advance notice that they’d take away their guns. Instead, she said, just wait until you’re elected to do it.

While discussing Beto O’Rourke’s decision to drop out of the Democratic presidential primary, the View panel debated why the former Texas congressman was unable to break through despite early hype.

“Well, not everybody is born to be president, I guess,” co-host Abby Huntsman said, referencing O’Rourke’s highly mocked claim to Vanity Fair when he first announced his candidacy.

After the table wondered aloud whether this should be a signal to other also-rans and low-polling candidates to drop out, conservative co-host Meghan McCain—who has engaged in a very public feud with O’Rourke over his anti-gun stance—weighed in.

“Beto, when my husband told me he got out of the race, I think he’s actually like a beta test for why going so national and being beloved by the media is so dangerous,” she declared.

The ex-Fox News personality said that O’Rourke’s gun buyback proposals hurt him, noting that other Democrats have said clips of the ex-congressman saying he’d take away AR-15s and other such weapons would be used by the National Rifle Association and other conservative organizations for years.

This prompted Behar, a regular sparring partner of McCain’s, to jump in with her own advice for Democrats.

“They should not tell everything they’re going to do,” Behar exclaimed. “Like, if you are going to take people’s guns away, wait until you get elected and then take the guns away. Don’t tell them ahead of time!”

While many in the audience laughed and clapped, McCain sounded off.

If you are interested in reading what viewers of this article had to say, then go to:

Doesn’t anyone understand that this is “COMMON SENSE” proof that the democrats do lie, have lied, and will lie in the future? To my way of thinking, it only makes “COMMON SENSE” to vote the liberal bastages out of office, even for dog catcher.